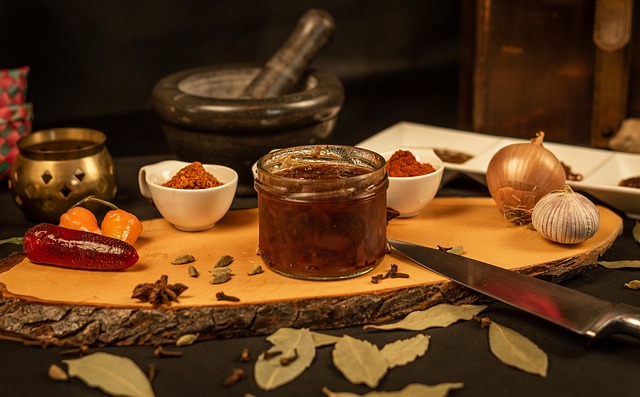 It was the morning after the night before. I came downstairs into the kitchen and I could still smell it – my disastrous attempt at making green tomato chutney.

Hours of chopping and stirring become sloppy essence of burnt offerings. The saucepan sat on the stove in soak, with the blackened remnants of my attempt permanently seared to its DNA.

Having grown the tomatoes from seeds, I was downhearted. I felt like I had wasted them. When I first I sampled the contents of the pan it tasted amazing. I was so proud of myself.

And then it all went wrong.

But I had to remind myself, I have never ever tried pickling or making preserves. This was my first time. I didn’t know that you’re not supposed to put a lid on the pan. A lidless pan means that the vinegar can evaporate and cook down. This vital piece of information was presumed knowledge. But I was a beginner.

I eventually talked myself out of my malaise by saying that although I might have wasted the tomatoes, it had been a great learning experience. Next time I could learn from my mistakes and have better success.

When you are a beginner artist or writer, you are very keen. You plough into a project, which you really want to be a masterpiece, with ignorant bravado.

It invariably doesn’t turn out as you expect or you get a lot of constructive criticism for it. This deflates your optimism and you decided that you’re crap at art or writing and you’ll never be able to do it.

This is the stage where a lot of people give up and conclude that it just isn’t for them.

If you are wise you will keep learning and practising. You’ll take the feedback from the criticism and seek to be better with your next project. You will learn more about your craft and keep putting it into action.

Over time you will get better. Some techniques will become obvious to you and you will do them with unconscious confidence.

No one creates a masterpiece with their first attempt

Or their second or their third. It might take ten, twenty or a hundred attempts. Eventually you will produce something which you are proud of and receives fantastic feedback from others.

But if you give up after your first disaster, then you’ll never get to improve.

A few days later I opened one of the jars and sampled the contents. The taste wasn’t too bad but when I had a huge dollop with my lunch, it was a bit harsh on the digestion. I think this was the excess vinegar.

However, not to be defeated I gathered up more green tomatoes, bought a new (non-stick) saucepan and tried again. This time it was a much smoother process, nothing burnt and it thickened beautifully.

The recipe for success?

Tell us about a time that you had an epic fail and what you did to recover from it. Be brave. Your comment might be just what someone else needs to read to make them feel better.